Short Message Service or SMS for short, one of the corner stones of mobile services, just turned 20 years old in 2012.

Talk about “Live Fast, Die Young” and the chances are that you are talking about SMS!

The demise of SMS has already been heralded … Mobile operators rightfully are shedding tears of the (taken-for-granted?) decline of the most profitable 140 Bytes there ever was and possible ever will be.

Before we completely kill off SMS, let’s have a brief look at

We have all seen the headlines throughout 2012 (and better part of 2011) of SMS Dying, SMS Disaster, SMS usage dropping and revenues being annihilated by OTT applications offering messaging for free, etcetcetc… & blablabla … “Mobile Operators almost clueless and definitely blameless of the SMS challenges” … Right? … hmmmm maybe not so fast!

All major market regions (i.e., WEU, CEE, NA, MEA, APAC, LA) have experienced a substantial slow down of SMS revenues in 2011 and 2012. A trend that is expected to continue and accelerate with mobile operators push for mobile broadband. Last but not least SMS volumes have slowed down as well (though less severe than the revenue slow down) as signalling-based short messaging service assimilates to IP-based messaging via mobile applications.

Irrespective of all the drama! SMS phase-out is obvious (and has been for many years) … with the introduction of LTE, SMS will be retired.

Resistance is (as the Borg’s would say) Futile!

It should be clear that the phase out of SMS does Absolutely Not mean that messaging is dead or in decline. Far far from it!

Messaging is Stronger than Ever and just got so many more communication channels beyond the signalling network of our legacy 2G & 3G networks.

Its however important to understand how long the assimilation of SMS will take and what drivers impact the speed of the SMS assimilation. From an operator strategic perspective such considerations will provide insights into how quickly they will need to replace SMS Legacy Revenues with proportional Data Revenues or suffer increasingly on both Top and Bottom line.

SMS2012 AND ITS GROWTH DYNAMICS

So lets just have a look at the numbers (with the cautionary note that some care needs to be taken with exchange rate effects between US Dollar and Local Currencies across the various markets being wrapped up in a regional and a world view. Further, due to the structure of bundling propositions, product-based revenues such as SMS Revenues, can be and often are somewhat uncertain depending on the sophistication of a given market):

2012 is expected worldwide to deliver more than 100 billion US Dollars in SMS revenues on more than 7 trillion revenue generating SMS.

The 100 Billion US Dollars is ca. 10% of total worldwide mobile turnover. This is not much different from the 3 years prior and 1+ percentage-point up compared to 2008. Data revenues excluding SMS is expected in 2012 to be beyond 350 Billion US Dollar or 3.5 times that of SMS Revenues or 30+% of total worldwide mobile turnover (5 years ago this was 20% and ca. 2+ times SMS Revenues).

Don’t be terrible exited about this number! It is like Nano-Dust compared to the total mobile data volume generated worldwide.

The monthly Byte equivalent of SMS consumption is no more than 20 kilo Byte per individual mobile user in Western Europe.

Let us have a look at how this distributes across the world broken down in Western Europe (WEU), Central Eastern Europe (CEE), North America (NA), Asia Pacific (APAC), Latin America (LA) and Middle East & Africa (MEA): 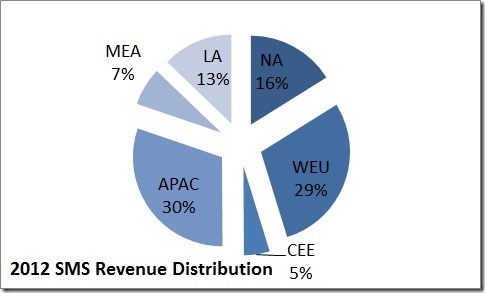 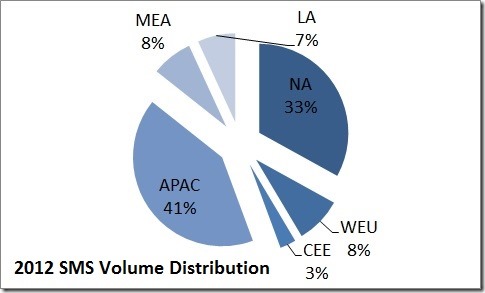 From the above chart we see that

Western Europe takes almost 30% of total worldwide SMS revenues but its share of total SMS generated is less than 10%.

And to some extend also explains why Western Europe might be more exposed to SMS phase out than some other markets. We have already seen the evidence of Western Europe sensitivity to SMS revenues back in 2011, a trend that will spread in many more markets in 2012 and lead to an overall negative SMS revenue story of Western Europe in 2012. We will see that within some of the other regions there are countries that substantially more exposed to SMS phase-out than others in terms of SMS share of total mobile turnover.

It is interesting to ask what drives SMS behaviour across various markets and countries.

Prior to reasonable good quality 3G networks and as importantly prior to the emergence of the Smartphone the SMS usage dynamics between different markets could easily be explained by relative few drivers, such as

(1) Price decline year on year (the higher decline the faster does SMS per user grow, though rate and impact will depend on Smartphone penetration & 3G quality of coverage).

(2) Price of an SMS relative to the price of a Minute (the lower the more SMS per User, in many countries there is a clear arbitrage in sending an SMS versus making a call which on average last between 60 – 120 seconds).

(3) Prepaid to Contract ratios (higher prepaid ratios tend to result in fewer SMS, though this relationship is not per se very strong).

(4) SMS ARPU to GDP (or average income if available) (The lower the higher higher the usage tend to be).

Finer detailed models can be build with many more parameters. However, the 6 given here will provide a very decent worldview of SMS dynamics (i.e., amount and growth) across countries and cultures. So for mature markets we really talk about a time before 2009 – 2010 where Smartphone penetration started to approach or exceed 20% – 30% (beyond which the model becomes a bit more complex).

Looking SMS usage and growth dynamics after 2008, I have found high quality statistical and descriptive models for SMS growth using the following parameters;

(b) SMS price to MoU Price.

It should be noted that each of these parameters are varying with time and there for in extracting those from a comprehensive dataset time variation should be considered in order to produce a high quality descriptive model for SMS usage and growth.

If a Market and its Mobile Operators would like to protect their SMS revenues or at least slow down the assimilation of SMS, the mobile operators clearly need to understand whether pushing Smartphones and Mobile Data can make up for the decline in SMS revenues that is bound to happen with the hard push of mobile broadband devices and services.

EXPOSURE TO LOSS OF SMS REVENUE – A MARKET BY MARKET VIEW!

As we have already seen and discussed it is not surprising that SMS is declining or stagnating. At least within its present form and business model. Mobile Broadband, the Smartphone and its many applications have created a multi-verse of alternatives to the SMS. Where in the past SMS was a clear convenience and often a much cheaper alternative to an equivalent voice call, today SMS has become in-convenient and not per se a cost-efficient alternative to Voice and certainly not when compared with IP-based messaging via a given data plan.

As Mobile operators push hard for mobile broadband and inevitably increases rapidly the Smartphone penetration, SMS will decline. In the “end-game” of LTE, SMS has been altogether phased out.

Based on 2012 expectations lets look at the risk exposure that SMS phase-out brings in a market by market out-look;

We see from the above analysis that 9 markets (out of a total 74 analyzed), with Philippines taking the pole position, are having what could be characterized as a very high exposure to SMS Decline. The UK market, with more than 30% of revenues tied up in SMS, have aggressively pushed for mobile broadband and LTE. It will be very interesting to follow how UK operators will mitigate the exposure to SMS decline as LTE is penetrating the market.  We will see whether LTE (and other mobile broadband propositions) can make up for the SMS decline.

More than 40 markets have an SMS revenue dependency of more than 10% of total mobile turnover and thus do have a substantial exposure to SMS decline that needs to be mitigated by changes to the messaging business model.

Mobile operators around the world still need to crack this SMS assimilation challenge … a good starting point would be to stop blaming OTT for all the evils and instead either manage their mobile broadband push and/or start changing their SMS business model to an IP-messaging business model.

IS THERE A MARGIN EXPOSURE BEYOND LOSS OF SMS REVENUES?

There is no doubt that SMS is a high-margin service, if not the highest, for The Mobile Industry.

A small de-tour into the price for SMS and the comparison with the price of mobile data!

Yes! It would be if that was the price a user would pay for mobile broadband data (particular for average consumptions of 100 Mega Bytes per month of Smartphone consumption) …

However, remember that an average user (worldwide) consumes no more than 20 kilo Byte per Month.

This is just to illustrate the silliness of getting into SMS value comparison with mobile data.

A Byte is not just a Byte but depends what that Byte caries!

Its quiet clear that an SMS equivalent IP-based messaging does not pose much of a challenge to a mobile broadband network being it either HSPA-based or LTE-based. To some extend IP-based messaging (as long as its equivalent to 140 Bytes) should be able to be delivered at better or similar margin as in a legacy based 2G mobile network.

Thus, in my opinion a 140 Byte message should not cost more to deliver in an LTE or HSPA based network. In fact due to better spectral efficiency and at equivalent service levels, the cost of delivering 140 Bytes in LTE or HSPA should be a lot less than in GSM (or CS-3G).

However, if the mobile operators are not able to adapt their messaging business models to recover the SMS revenues (which with the margin argument above might not be $ to $ recovery but could be less) at risk of being lost to the assimilation process of pushing mobile data … well then substantial margin decline will be experienced.

Operators in the danger zone of SMS revenue exposure, and thus with the SMS revenue share exceeding 10% of the total mobile turnover, should urgently start strategizing on how they can control the SMS assimilation process without substantial financial loss to their operations.

I have made extensive use of historical and actual data from Pyramid Research country data bases. Wherever possible this data has been cross checked with other sources. Pyramid Research have some of the best and most detailed mobile technology projections that would satisfy most data savvy analysts. The very extensive data analysis on Pyramid Research data sets are my own and any short falls in the analysis clearly should only be attributed to myself.

This entry was posted on January 1, 2013, 7:20 pm and is filed under Economics, Mobile Telecoms, Strategy, Technology. You can follow any responses to this entry through RSS 2.0. You can leave a response, or trackback from your own site.

It's not Magic! It is mainly Linear Algebra Applied Creatively!

Artificial Intelligence Strategies & Policies Reviewed. How do we humans perceive AI?; Are we allergic to AI?, Have AI aversions? or do we love AI or is it hate? Maybe indifference? What about trust? More or is it less than in our peers? How to shape your Corporate AI Policy; How to formulate your Corporate AI Strategy. Lots of questions. Many answers leading to more questions.

Things I tend to forget

if I don't write it down, I have to google for it again